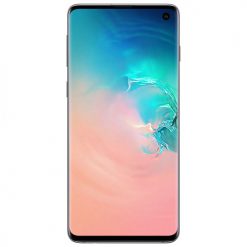 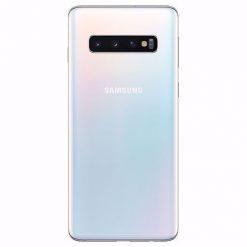 The premium Samsung Galaxy S10 comes with a strong processor along with excellent cameras. The major highlight of the device is a punch-hole display that occupy a tiny corner of the display. Samsung Galaxy S10 On EMI-8gb 128gb white also has other additional features like a fingerprint scanner, IRIS scanner etc. It also has great storage capacity. Overall, the Samsung Galaxy S10 is undoubtedly one of the best smartphones in its league.

A fully featured Smartphone
Design and Display
The smartphone comes with a 6.1-inch Dynamic AMOLED display with a screen resolution of 1,440 x 3,040 pixels and offers a pixel density of 551 PPI. The screen is protected with Corning Gorilla Glass v6, which helps to keep away any kind of scratch or minor collision. In addition, the smartphone is waterproof as well as dustproof.
Configuration and OS
Coming to its performance, the device is equipped with an octa-core (2.73GHz dual-core M4 Mongoose, 2.31GHz dual-core Cortex A75 and 1.95GHz quad-core Cortex A55) processor setup. The two processors are paired with an 8GB RAM and a Mali-G76 MP12 GPU which floats on a 64-bit architecture. This combination is seated upon a Samsung Exynos 9 Octa 9820 chipset. The Samsung Galaxy S10 boots on Android v9.0 (Pie) operating system.
Camera and Connectivity
The smartphone is armed with a triple primary camera setup having 12MP + 12MP + 16MP lenses along with a 10MP front camera. The primary cameras are capable of recording high-quality videos along with clicking mesmerizing pictures. Its front camera is a treat for the user and can also assist in making video calls.
In terms of connectivity, the  Samsung Galaxy S10 offers a wide range of options which include 4G with VoLTE, WiFi, Mobile Hotspot, Bluetooth, microUSB and GPS.
Storage and Battery
The smartphone has an inbuilt storage capacity of 128GB, which can be further expanded up to a mammoth 512GB by using a microSD card.
A 3,400mAh Li-ion battery can provide immense power to keep the device active for a long time. It also features fast charging and wireless charging support.